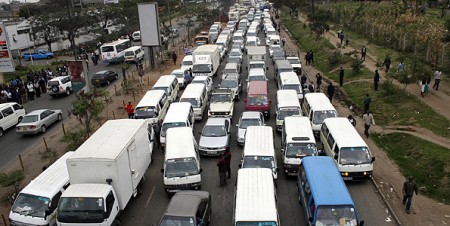 Nairobi traffic sucks.  Nairobi drivers suck.  People driving cars in Nairobi are stupid.  Matatu drivers, lorry drivers, GoK drivers, taxi drivers, vitz drivers and everyone else in between, the whole of the country should have their licenses revoked and sent back to driving school.

Two lane roads are not four lane roads.  Just because the oncoming traffic lane is empty does not mean it should be used to pass all the other stopped vehicles.  That large lorry in the road is blocking traffic from both sides and if you squeeze in trying to get pass while everyone else is waiting for things to clear, then all you are going to do is jam up everything else.   Pulling out in front of me after watching me approach you for the last five seconds at top speed and counting on my brakes to work is stupid on your part.  A weak smile and an “oops I’m sorry” wave doesn’t calm my anger.

Be happy I don’t own a firearm.

There I have ranted a little.

Oh yeah the other point:  Why is Kenya still poor?  Cause people don’t know how to drive and waste every one else’s time.  Time that could have been spent earning something instead of burning petrol and polluting the air. 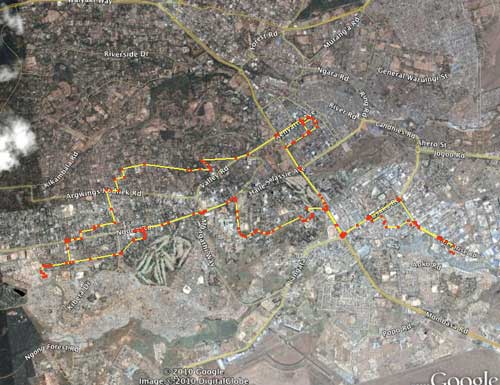 This is a map of my trip today.  Something like 16.2 miles or approximately 22 kilometers.  Total driving time: 3.5 hrs.
Wasting a Sunday Sudan Votes Music Hopes