yesterday a large building being constructed in downtown somehow collapsed and at the moment they are not exactly sure how many people are dead. i sat and watched the local news coverage of the event yesterday. From the camera angles and the massive crowd of people and the fact that it seemed everyone was yelling at the same time, it was complete chaos. They have estimated that something like 10,000 onlookers showed up to watch, and this press of people made it very difficult for rescue vehicles and personel to get in and out of the area.

here is a photo taken from Der Yid’s flickr stream. 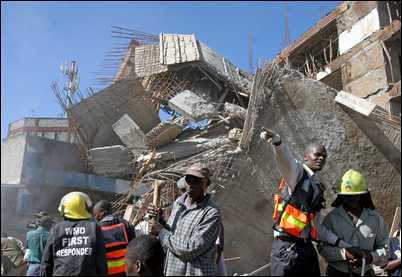 read this report from cnn: Many trapped in Nairobi building collapse

This is something which I have neglected to mention before now, but kenya has been suffereing from drought and famine in many parts of the country for the last few months. Not only Kenya, but large parts of the “Horn of Africa”. Part of the reason I forgot to mention it is that it is not very obvious to us here in the big city. Although the number of Maasi moving their cattle through the city to graze has increased quite a bit. the sad thing is that it is really difficult to address the situation. Partly due to lack of infrastructure in the country to easilily move much needed supplies, partly due to massive corruption in governing bodies and everyone’s desire to get as much money into their own pockets as possible and *maybe partly due to a “hesitancy” from international communities to respond to yet another problem on the long list of many already bothering the world.

if you are interested to read up more about the drought/famine in Kenya at the moment check out these links from Google news: News stories about Kenya drought
This particular AP link is a pretty good read.

unfortunately I can’t find any photos to share with you anywhere on the net at the moment. that is a little frustrating.

and last but not least:

kenya recently introduced a breathalizer test to curb the amount of drunken drivers. There are way too many in this country. But the cops were pulling over so many people and busting alot of them (the police were probably also using it as a good means to scam large amounts of money from people) that a group of folks came together and took the issue to court saying that at the moment the law is unconstitutional because it wasn’t passed by legislation or something to that affect. the BBC has a nice article on it, read it here: Kenya suspends breathalyzer