as the bird flies… (in a straight line:)), Nairobi is 8,628.93 miles or so from East Texas, the area which i come from. at least that is what Google Earth indicates.

today i have been looking at Google Earth and found that they have updated some of the images and information that they had on places around east africa. They have some great shots of Nairobi. You can see enough detail to make out little white specs that are vehicles driving on the road. They even have more detailed images of Lokichokio, Kenya (the town in which I was based while working for Medair). If it were not for some clouds in the photo, I would have been able to locate the house I stayed in while living there.

They also have detailed images of a couple of the major towns in Southern Sudan: Juba, Malakal, Wau (there are more, but I don’t know em). if any of you folks are interested in getting a geographical reference, check out google earth or even http://maps.google.com and do some searches.

in the meantime here are a couple of images I saved off of google earth: 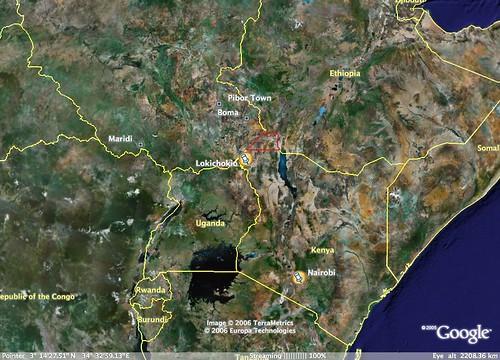 this is the part of the world that I live in at the moment. Most of my time has been spent in Lokichokio, Nairobi, parts of Sudan and Maridi. 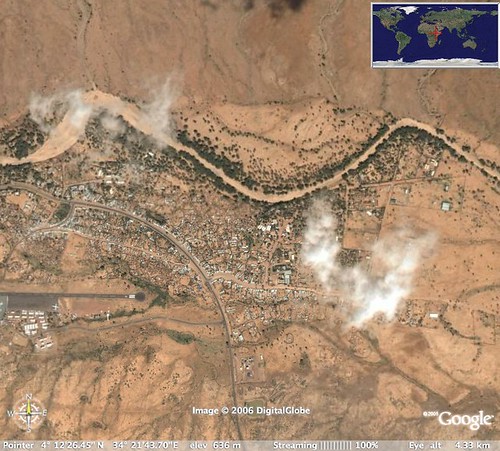 Image of lokichokio. You can even see an aircraft on the runway. 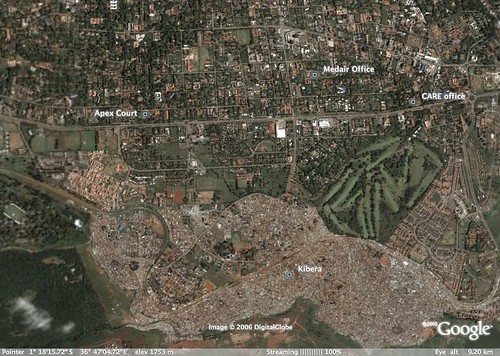 This is a picture of the area of Nairobi that I spend the majority of my time in. Actually, somewhere on the line between Apex Court and the CARE office is where I am found most of the time, or at either of those two points. This is mostly because I don’t have transportation and walk back and forth between my house and the office. Kibera, the largest slum in Africa is just below (the big grey area labeled “Kibera”). Just above Kibera on the right, you see a large area of green rows. This is the Nairobi Golf course which comes right up to the edge of Kibera. I am not sure which one was there first.